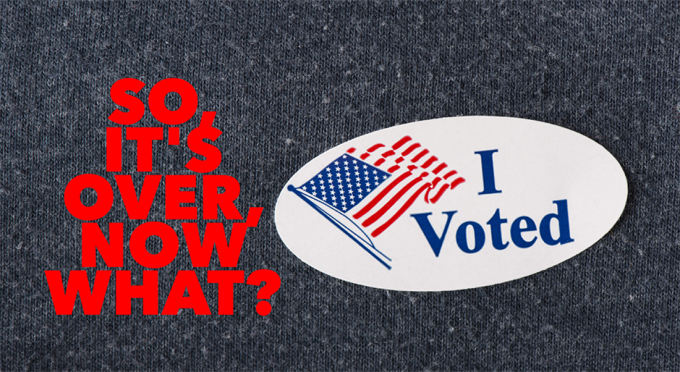 After what seemed an endless time of political ads, mud-slinging, scandal, debate, disappointment and disgust, it's over and the United States is electing a new president. As the results start to come in are you happy? Are you distraught? Are you surprised?

Let me tell you who isn't surprised; God. Our God is in control and knew all along what the outcome would be, and where it would lead us.

Sometimes, His purpose doesn't exactly agree with our wishes:

Isaiah 55:8 “For my thoughts are not your thoughts, neither are your ways my ways, saith the LORD”.

As Christians, we shouldn't be overcome with a feeling of hopelessness, or hopefulness. We mustn't put all our hope in any person; our hope should be in our Lord and Savior, Jesus Christ.

I know what you're thinking ~ “But what if laws are passed that I don't agree with? What if Supreme Court Justices are selected that will rule in favor of evil and wickedness?”

Well, the Bible gives us several examples of how to deal with “rulers”. For example take Daniel, who as a young man, was taken captive by the Babylonians and was forced to serve on King Nebuchadnezzar's court. He wasn't alone, he had three companions; Shadrach, Meshach, and Abednego.

During his life, Daniel served under kings Nebuchadnezzar, Evil-Merodach, Belshazzar, Darius, and Cyrus. All during that time, Daniel was faithful to the Lord. He used his skills and abilities to be useful, and as a result he was honored and respected. Did he and his friends always obey the King's laws and decrees? No!

The first problem they confronted was being expected to eat the King's meat and drink the King's wine, which had been offered to idols. They refused and proved to their “caretaker” that they could thrive on vegetables and water.

Then, King Nebuchadnezzar made a golden statue of himself, and ordered everyone, at the sound of a trumpet, to bow down and worship it. Daniel, must have been away from Babylon at the time, but Shadrach, Meshach, and Abednego refused, and were thrown into a fiery furnace (from which, God rescued them).

Later on, under King Darius' reign, the king's counselors advised him to make a decree that anyone worshiping any other God than the King (for the next 30 days), should be thrown into the lion's den. It was Daniel's practice to pray from his window three times a day, and of course these “counselors” caught him in the act, and told the king. The king had no choice at that point, but to enforce the law he had signed, and so he had Daniel thrown into a den of lions (but God saved him from the lions).

Daniel, and his three friends used their wisdom, knowledge, and skills to the best of their ability. They obeyed the king's decrees as long as they did not conflict with God's laws. Daniel summed up his viewpoint like this:

Daniel 2:20-23 “Daniel answered and said, Blessed be the name of God for ever and ever: for wisdom and might are his: And he changeth the times and the seasons: he removeth kings, and setteth up kings: he giveth wisdom unto the wise, and knowledge to them that know understanding: He revealeth the deep and secret things: he knoweth what is in the darkness, and the light dwelleth with him. I thank thee, and praise thee, O thou God of my fathers, who hast given me wisdom and might”

As I've said many times, I don't believe things happen “by chance”. Our Great God is in control, and we are here for His purpose. Remember, we were never promised a “rose garden”, BUT, we are told:

So, regardless of the outcome of this election, hold on to God's promises; such as:

Isn't it great how the Bible gives us instructions for any circumstance? For instance, “what are we to do”?? As Paul told the Thessalonians (who were suffering persecution):

In every thing give thanks: for this is the will of God in Christ

Quench not the Spirit.

Prove all things; hold fast that which is good.

Abstain from all appearance of evil.

And the very God of peace sanctify you wholly; and I pray God your whole spirit and soul and body be preserved blameless unto the coming of our Lord Jesus Christ”.

Titus 2:11-14 “For the grace of God that bringeth salvation hath appeared to all men, teaching us that, denying ungodliness and worldly lusts, we should live soberly, righteously, and godly, in this present world; looking for that blessed hope, and the glorious appearing of the great God and our Saviour Jesus Christ; Who gave himself for us, that he might redeem us from all iniquity, and purify unto himself a peculiar people, zealous of good works”.

Remember, we have a “hope that is within us”, and God's word to support and sustain us, and we are aware that our Redemption is drawing near. So, put your hope and trust in the Lord, do His will, let your light shine, and He will take care of the rest.

Romans 8:28 “And we know that all things work together for good to them that love God, to them who are the called according to his purpose”. 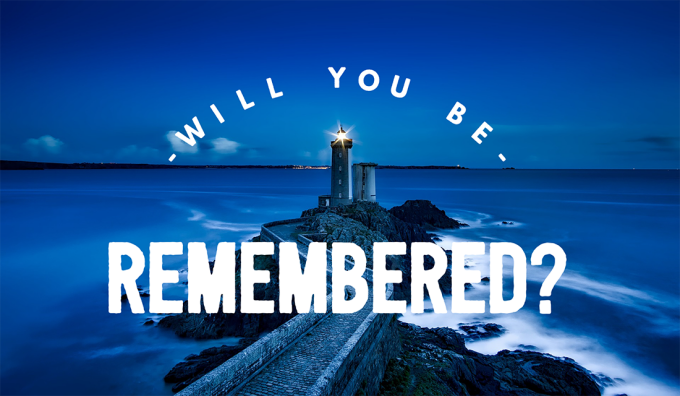 I’ve been thinking lately about the amazing people the Lord has led into my life that have been a true blessing. Those that seem to have had the greatest influence on my life were believers who lived their faith in openness and with intent to be a blessing. It wasn’t an accident; it wasn’t just my good fortune; it happened because they lived their lives intending to yield to the Lord Jesus as He worked through their life to touch mine.

Yes, I have a lot to be thankful for. And those that influenced me the most are the ones that I remember the best.

I remember Mrs. Fry...she was my homeroom teacher and my teacher of mathematics in the seventh grade. I remember her intentionally pulling me aside after class one day to give me the encouragement that I needed at that time not to just go along with the crowd, but to follow the path that Christ has set aside for me. She assured me that I could be the leader instead of the follower and that’s why the Lord had me in that school and in her class. Her remarks fortified the truth I had been learning from Scripture...that the Lord has a purpose for every person and a plan for their life. She was devout; she was a spitball of energy; she was relentless as a teacher and I thought of her as not only my teacher but my friend. I could always talk to her if need be. And I did...many times.

I remember Coach Pierce...the first Coach that really sticks out in my mind. He influenced me by reminding me every day that Christian young men weren’t...as he said it, “Sissies”...that Christians young men were to be strong, to be passionate, to be leaders by actions and by words. He would lead devotionals before our games that taught us the importance of never giving up and that the way you played the game was just as important as playing the game. He introduced me to hard work and gave me my first responsibility as a leader. He allowed me to call the defense. I made the decisions on what the formations and the coverages out on the field should be. And he was never afraid of people knowing that he had faith in Christ. He was a powerful influence. I thought of him as not only my coach but my friend. I could always talk to him if need be. And I did...many times.

I remember Mrs. Ennis. She was my eight grade English teacher. She knew that I struggled with parsing, but she spent extra time helping me to see and understand the value of words and their placement in a sentence to communicate clearly and without misunderstanding. She increased my vocabulary and introduced me to reading for enjoyment. I’m not sure how many books I read and reported on to her. But I did it and I began to enjoy it. And to this day I use the tools she began to equip me with in daily ministry. She would often leave me with the statement that went something like this, “Who knows, someday the Lord may want you to preach the gospel to people in need.” She was stern when necessary, but while others seemed to be afraid of her, I thought of her as not only my grammar teacher but as my friend. I could always talk to her if need be. And I did...many times.

Really, I could go on and on...there have been so many that the Lord has used to bless, mold, challenge, teach, and grow my life. I would imagine that you could do the same. It’s good to stop and think about it and to be moved to thankfulness.

Each one of these that God used was successfully fulfilling their mission as given to them by the Lord in Matthew,

"You are the salt of the earth; but if the salt loses its flavor, how shall it be seasoned? It is then good for nothing but to be thrown out and trampled underfoot by men. You are the light of the world. A city that is set on a hill cannot be hidden. Nor do they light a lamp and put it under a basket, but on a lampstand, and it gives light to all who are in the house. Let your light so shine before men, that they may see your good works and glorify your Father in heaven.Matthew 5:13-16 (NKJV)

You know when your food is seasoned or preserved with just one grain of salt the impact in negligible, but when you have many grains the intended result is realized. A light that is hidden has no impact at all, but when brought out for all to see it does show people the way.

All of these disciples of Christ seasoned my life in just the right way, at just the right time and yes, sometimes preserving my life from the corrupt notions of the world. They were indeed the light I needed to point me to Christ and encourage me, help me, and lead me to live a daily, genuine walk with Him.

And did you notice, whether they were teaching, pushing me to new heights, challenging my lifestyle, whatever, I always thought of them as my friends. The love of Christ just came through them... to me.

We are all called to be the salt and light of the earth. No need for salt and light in heaven...it’s already taken care of there. But here, in a decaying and corrupt world that is just full of little Ralph’s trying to find their way...or might I add...a world full of people of all ages trying to find their way, there is great need for you and for me...for followers of Christ to passionately and intentionally bless the lives of others.

Maybe someday...even after many years...someone will remember you...because you influenced their life to live a deeper and better way with Jesus as their Lord. And maybe, just maybe, they will remember you as not only an influencer, but as a friend. Someone, they could always talk to...and they did. 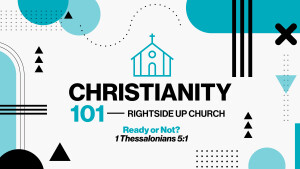